Can You Spot a Narcissist by Their Eyebrows?

Is it narcissistic abuse or not?

We think we can spot them. People who never miss a chance to catch a glance of their own reflection, never met a mirror they didn’t like, and who look down their nose at others. But is that really a reliable way to spot narcissists? After all, research shows they are both flashy and fun—often the type of people who make you feel happy to be around them. Livening up the crowd with their energy and extraversion, you might find them very attractive—initially. At some point, you will perceive the real personality behind the persona. So to save you some valuable time, can you spot a narcissist sooner rather than later—just by looking?

Research reveals you may be able to spot a narcissist through the eyebrows. A series of studies by Miranda Giacomin and Nicholas O. Rule, “Eyebrows Cue Grandiose Narcissism,” (2018) demonstrated how eyebrows accurately convey grandiose narcissism.[i] The authors describe grandiose narcissism as “the tendency to be egotistical, self‐focused, and vain.” They identify it as a common “dark” personality trait, whereby an individual exhibits positive qualities such as extraversion and self‐confidence, but also negative traits such as vanity, selfishness, egotism, and a sense of entitlement.

Giacomin and Rule note that narcissists are often well-liked initially, and only become disliked as their true colors begin to seep through, and it becomes apparent they are more interested in admiration and attention than intimacy. Because their charisma and charm facilitate social manipulation, the authors suggest that identifying narcissists early on in a relationship may help avoid becoming involved with this dark personality. 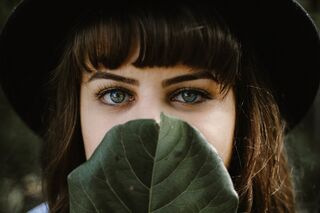 Source: Image by StockSnap from Pixabay

The Reliability of First Impressions

When meeting another person, research shows that we notice the face first, before noting other aspects of physical appearance, or gestures. Giacomin and Rule note that even photographs reveal personality characteristics and social category. Faces provide us with important information that impacts interpersonal interaction, which the authors note can influence approach or avoidance behavior.

Research also shows that people can spot grandiose narcissism from bare faces—free of makeup or cosmetics. In addition, although narcissists are apparently better able to manipulate attractiveness through adornment, they look equally attractive when unembellished.

Giacomin and Rule note that even though narcissists “may not naturally be more attractive than non‐narcissists, narcissism seems to carry an enduring physical signature in the face that goes beyond adornment.” Their research sought to find out what that was. They explain that finding facial features associated with narcissistic traits can help understand how they manipulate their appearance to gain notoriety, status, or recognition. And being able to recognize such features will help people avoid the often negative consequences of becoming involved with them.

Giacomin and Rule endeavored to ask the central question many have about their research findings. Why eyebrows? They explain that although they have not been subjected to extensive study, eyebrows serve important social functions, and might actually be the most expressive facial feature. They explain that eyebrows facilitate a broad spectrum of emotions from happiness to surprise, from anger to fear. They even note that eyebrows can communicate, such as when a raised eyebrow signals having a question. And in terms of visibility, they note that eyebrows, and the expressions they facilitate, can be spotted from a distance.

Giacomin and Rule note that eyebrows play a significant role in facial recognition, impacting perception even more than the eyes. They cite previous research showing that people recognize celebrities without their eyes, but not without their eyebrows (i.e. Winona Ryder, Richard Nixon). They suggest that because narcissists crave recognition and admiration, perhaps they cultivate distinctive eyebrows in order to be noticed, recognized, and remembered.

They also note that given a narcissist´s focus on cultivating an attractive appearance, eyebrow grooming, from plucking, to waxing, to tattooing, enhances this goal. They note that because narcissists often aggressively pursue potential sexual partners, their “grandiose eyebrows” could signal sexual prowess.

The Brows Have It

In their first study, the authors manipulated facial features, ultimately finding that accurately judging grandiose narcissism depends on viewing a person’s eyebrows. In three other studies, they identified the primary characteristic supporting the judgments as eyebrow distinctiveness—such as thickness and density.

In a third set of studies, Giacomin and Rule confirmed the importance of eyebrows in recognizing narcissism by measuring amount of perception change when switching the eyebrows of narcissists and non-narcissists between faces.

They concluded that taken together, their data shows that narcissists reveal their personality through distinctive eyebrows, which facilitates the identification of narcissistic personality. We say the eyes are the windows to the soul—apparently so are the eyebrows.